Rarely has Australia experienced such dynamic trade policy and export markets. Following recent progress on the UK – Australia trade agreement, Australia’s historical relationships with England are being re-kindled, while our links to Europe are set to be strengthened with the negotiation of a European and Australia trade pact. South East Asia continues to be an area of success and opportunity, and India is full of potential. China remains a current challenge for exporters.

After a challenging 12 months for the wine industry following China’s sudden tariff impost, the Australian wine sector will also have more reason for optimism with the free trade deal eliminating tariffs on Australian wines sold in the UK. Other winners on the Australian side will be Australia’s beef, sheep and dairy as the deal is set to increase the UK’s tariff-free threshold ensuring a gradual reduction in existing tariffs. Beef and sheep meat tariffs will be eliminated after ten years and dairy products over five years.

It is all about agriculture, carbon emissions and cars

Like the UK trade negotiations, agriculture will again be a key area of negotiation and opportunity for Australia. The European landscape is more challenging however with the largest trade agreement Australia’s contemplated amounting to 30 chapters and with 27 stakeholder countries having their say. Everything is on the table, from beef, prosecco, fetta to the luxury car tax and carbon border adjustment mechanism. The path to an agreement will be more challenging but the rewards potentially far greater with a combined market of 450 million people.

Diversifying our trading relationships in Asia

Together these markets are some of the largest and fastest growing for Australian food and beverage exporters.

Japan is Australia’s second-largest agricultural, forestry and fisheries export market, worth over $5 billion – China is the largest at around $14 billion. The Japan-Australia Economic Partnership Agreement is delivering significant benefits and opportunities to Australian farmers and agricultural producers. Historically, Australian food exporters have not been highly active in the South Korean market but the Korea-Australia FTA has significantly improved access for Australian exporters.

Australia’s bilateral trading relationship with Vietnam has been one of Australia’s fastest-growing in recent years. Vietnam’s strong economic growth and expanding middle- class have increased demand for Australian exporters of dairy, meat, consumer goods, wheat and grains. Singapore and has been Australia’s tenth largest market for food, beverage and agribusiness products. The appointment of former Tasmanian Premier, Will Hodgman, as the new High Commissioner to Singapore, the city-state will remain a high- profile market for Australia. 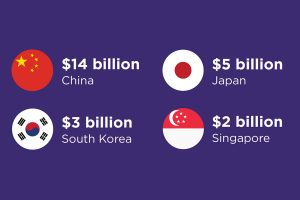 Over the next 20 years, India will increasingly demand many of Australia’s goods and services – including agriculture, healthcare, science and innovation. There’s no single major market out to 2035 with more growth opportunities for Australian business than India. The Australian Government’s India Economic Strategy is an important document for any business seeking to export and do business with India. Like Singapore, a former state premier – Barry O’Farrell – has been appointed as High Commissioner to navigate the challenging local politics and divergent markets of the subcontinent.

Next steps and opportunities for Australian exporters

State and Federal Governments are targeting new markets with more overseas offices and resources giving Australian businesses additional assistance to diversify their export strategies. The Australian Government and industry associations, such as the Australian British Chamber of Commerce, are holding consultation forums with businesses on the trade agreements and negotiations and new market opportunities. This is a chance to ensure your company’s views are heard.

Agriculture remains a sector attracting strong levels of foreign investment into Australia. Over the years it has however been in the spotlight with investment plays for large agricultural properties attracting significant amounts of political, media and public attention with the national interest test being carefully applied in some cases. National security is also likely to play an even more important role in foreign investment decisions due in part to the expanded scope of critical infrastructure.

The biggest investors in agriculture have generally come from countries with mature agriculture sectors: Canada, the UK and the US. The National Farmers’ Federation outlined a roadmap to grow the current value of Australian agriculture from around $60 billion to $100 billion by 2030. This has been endorsed by the Australian Government and is likely to require substantial foreign investment.

Learn more about our Expertise and Services